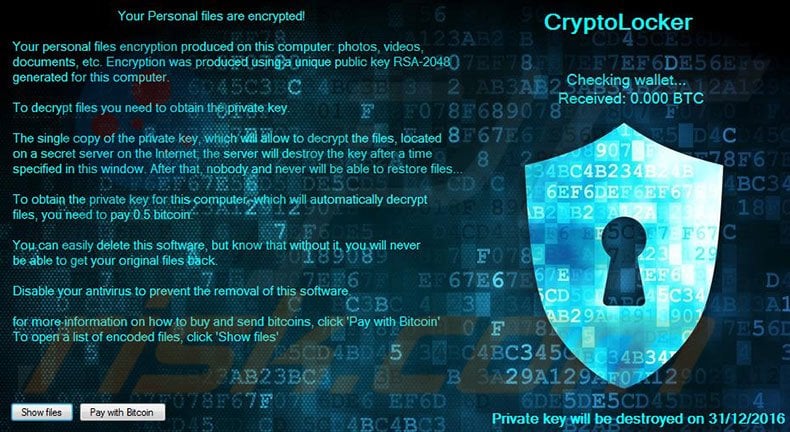 “I resolve to keep my computer healthy this year.”

2016 has been dubbed “The Year of the Ransom”, nearing 1 billion dollars of ransom money collected by cybercriminals. IBM concluded that ransomware attacks have increased by 6,000% – yes, six thousand, and, thus, so did the number of victims. The future doesn’t look too bright either, with 2017 expecting to see further growth in the ransomware business.

Ransomware are software that slip through your spam filter and/or anti-virus. How? To name a few, this can happen via email, fake ads on the internet, direct transfer from a usb key, unsecured ports on the firewall etc. Cybercriminals will try impersonating something somewhat familiar to trick you into downloading a virus or, the classic, breaking down the door to your network. Your information is then held hostage until you pay. In the last few years, the most malicious and common ransomware has been (some version of) CryptoLocker.

What are the symptoms of Crypto, you ask?

These are signs that a virus has or is encrypting your files, ie. renders them unusable. The type of encryption of the Crypto viruses cannot be “cracked”; the only cure for your data is to buy the antidote. This business model has turned into a billion dollar industry. Hackers are only becoming shrewder.

To save you the ransom money, as your IT provider, we go into red-alert-mode once we encounter a virus such as CryptoLocker. With all hands on deck, we find the infection, stop it and then recover your data from backups. This process generally takes 1 business day, time in which your network might be down. It’s worth mentioning that there are no removal tools for Crypto. Without the custom-built decryption key, essentially, your files need to be deleted and recovered from backups.

Unfortunately, the best remedy for ransomware to avoid it altogether. To effectively avoid infection, you need to combine best practices of securing your network and educating your staff.

These are the best ways to avoid falling prey to such a vicious and expensive pest. And if you’re uncertain, call us before you click.

Contact us with comments or concerns about the CryptoLocker-type viruses or if you need help putting together an informative document.